Caragh O’Brien spoke about “Emergency Preparedness”—how visionary Caragh was: only a few days later we experienced a 4.0 earthquake! The speaker told us how she awoke to the emergency preparedness for a disaster. She analyzed the importance of having from water and food, to medicines and small cash. “First, you take care of yourself, then your household and after that your neighborhood”—Caragh concluded. 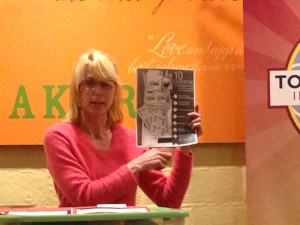 Caragh O’Brien during her speech on “Emergency Preparedness”

James Noh evaluated Caragh’s speech. James identified the comprehensibility of the speech, which was presented from the beginning as a practical evacuation layout of required objects in case of emergency. The evaluator pointed out that the presentation was an all-embracing guideline. He suggested lessening the number of objects listed, and stick to the most relevant ones, to let the speech flow with ease. 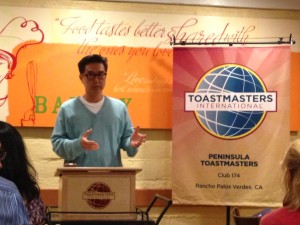 James Noh during his evaluation to Caragh’s speech.

This entry was posted in Uncategorized. Bookmark the permalink.